The full specification of the Build Event Protocol can be found in its protocol buffer definition. However, it might be helpful to build up some intuition before looking at the specification.

Consider a simple Bazel workspace that consists of two empty shell scripts foo.sh and foo_test.sh and the following BUILD file:

When running bazel test ... on this project the build graph of the generated build events will resemble the graph below. The arrows indicate the aforementioned parent and child relationship. Note that some build events and most fields have been omitted for brevity. 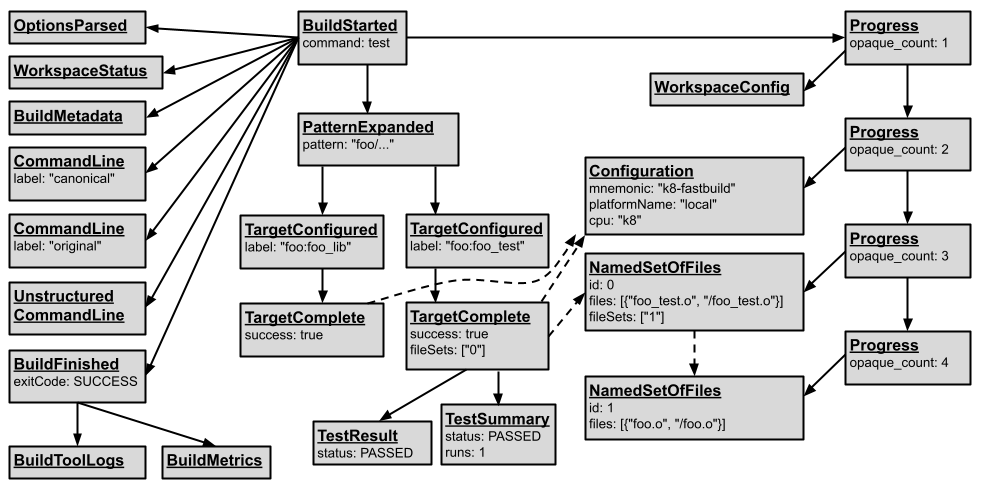 Initially, a BuildStarted event is published. The event informs us that the build was invoked through the bazel test command and announces child events:

The first three events provide information about how Bazel was invoked.

Besides the parent and child relationship, events may also refer to each other using their build event identifiers. For example, in the above graph the TargetComplete event refers to the NamedSetOfFiles event in its fileSets field.

Below is an instance of the TargetComplete event for the //foo:foo_lib target from the above graph, printed in protocol buffer’s JSON representation. The build event identifier contains the target as an opaque string and refers to the Configuration event using its build event identifier. The event does not announce any child events. The payload contains information about whether the target was built successfully, the set of output files, and the kind of target built.

Evaluation results for aspects are available in BEP despite the absence of aspect-specific event types. For each (target, configuration) pair with an applicable aspect, Bazel publishes an additional TargetConfigured and TargetComplete event bearing the result from applying the aspect to the target. For example, if //:foo_lib is built with --aspects=aspects/myaspect.bzl%custom_aspect, this event would also appear in the BEP:

Note that the only difference between the IDs is the presence of the aspect field. A tool that does not check the aspect ID field and accumulates output files by target may conflate target outputs with aspect outputs.

Determining the artifacts produced by a given target (or aspect) is a common BEP use-case that can be done efficiently with some preparation. This section discusses the recursive, shared structure offered by the NamedSetOfFiles event, which matches the structure of a Starlark Depset. Consumers must take care to avoid quadratic algorithms when processing NamedSetOfFiles events because large builds can contain tens of thousands of such events, requiring hundreds of millions operations in a traversal with quadratic complexity. 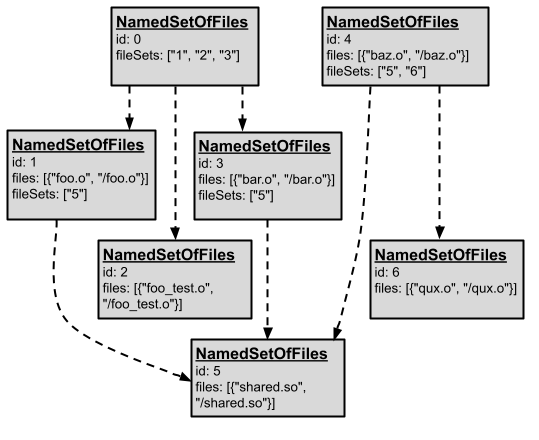 Given these ordering and sharing constraints, a typical consumer must buffer all NamedSetOfFiles events until the BEP stream is exhausted. The following JSON event stream and Python code demonstrate how to populate a map from target/aspect to built artifacts in the “default” output group, and how to process the outputs for a subset of built targets/aspects: